Number 3 is a Charm! 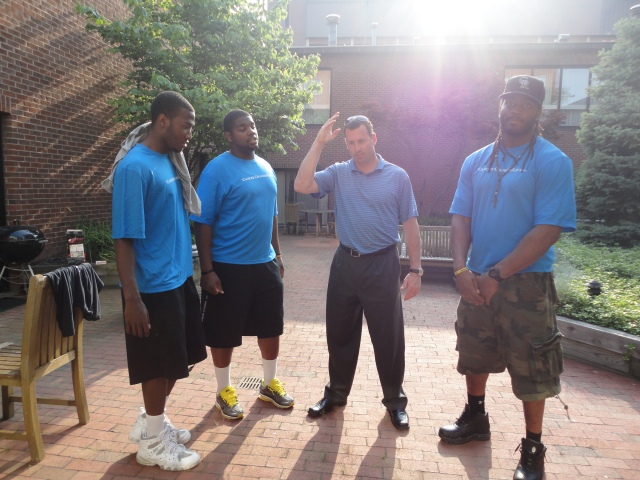 Last night the Towson Football players came back to volunteer with UCF at Hope Lodge. I have always been impressed with these young men but last night was the best yet. Not only did these young men volunteer their time to cook, but some of them had just finished up finals yesterday. Instead of going home, they came out to Hope Lodge with Coach Ambrose and this isn’t even the best part.

The menu last night was a cook out. When the players arrived at Hope Lodge,  I sent them straight outside to Andy, a UCF volunteer, to help cook about 50+ burgers. To my surprise, the players had all the burgers cooked in record time and dinner went off without a hitch. All the guests loved chatting with the players, asking them what positions they played and thanking them for taking their time to cook for them.

In the middle of every meal, the staff at Hope Lodge gives the floor to the volunteers to talk about why they are here and the organization they came from. Last night after a brief introduction about Ulman, I turned the floor over to the players. This is where it gets great…

Each player that came last night took turns telling everyone their name, what position they played, and why they were personally there. Two of the players had been each time Towson volunteered with us at Hope Lodge but there were also two new faces. Hearing each young man explain reasons why he volunteered was phenomenal. They were crowd favorites! Every player had a different answer as to how cancer has affected their own life but their was one consistent factor in each personal speech. While talking, each player said the reason they volunteered their time was to give back to their community. Giving back to the community is a part of the Towson Football program’s mentality and a great one at that. It teaches that sports aren’t the only thing that matter in life and if you can give back, DO IT.

Last night was very memorable for every guest and volunteer there. As the players were walking out, one of them stopped me and said, “Email the coach, we want to come back soon.”

1 Response to Number 3 is a Charm!